(2002-2003) is a collection of photographs originally displayed in my apartment in Chicago as part of a show in 2003, which consisted of installations in each of my rooms.  Originally, in 1999, I created a performance piece about apartment living, specifically the noise of apartment living, for a small audience in my first Chicago apartment.  For months I had been living below a drug dealer and there were people in and out of his apartment at all hours.  At a certain point, I began imagining what they were doing up there based only on the noises they created.  Imagination slowly gave way to playful delusion.  In my head, they were conducting a furniture-moving seminar or a school to teach ladies how to walk in high heels.  When the drug dealer moved out, under the cover of night (naturally), I orchestrated a small performance in which several people learned to walk in high heels in the vacant apartment above as the audience listened in my apartment below. 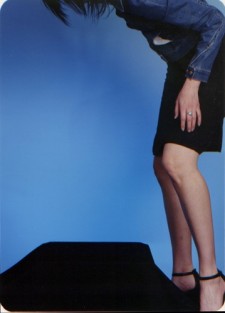 In 2002 I decided to begin a “typical female behavior”:  collecting and wearing high heels.  I later decided to photograph these new acquisitions in a way that made sense with  my notion of a school to teach people to walk in high heels:  the double exposure photograph we of a certain age remember from childhood…..though those photographs usually contained a floating head instead of feet.

This series of photographs was framed and hung on the walls of my bedroom for the exhibition.  A video entitled 101 was also shown on a small television on my dresser.   The video was simply a 30 minute loop of my feet and part of my legs walking intermittently in front of the camera.  The camera was placed on the floor for filming, I put on my favorite pair of heels and proceeded to fold and put away my laundry.  The result mirrored the seemingly random movements of upstairs neighbors.  Without prior knowledge of the task that was filmed and then presented in the installation, the viewer was left to come to their own conclusions as to the reasons behind the movement.